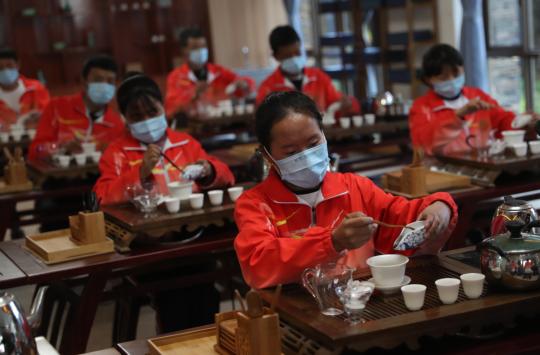 Rinmo, 18, used to live with her parents and two older brothers in a wooden house in a remote border area of the Tibet autonomous region, where the only way to get around was on horseback.

Then, several years ago, the family members were relocated to a new home in Zayu county of the city of Nyingchi, where they bought a car.

"Now, my brothers and I also have our own bedrooms," Rinmo said proudly.

While her parents and one older brother remain at home tending to highland barley on a small plot of land, the other brother is studying at a university in Jiangsu province.

Two years ago, Rinmo applied to Nyingchi Vocational and Technical School to major in management of star-rated hotels.

"I didn't perform well at junior middle school, and I chose the vocational school because I want to ease my family's financial burden by getting a job as soon as possible," she said.

After taking a flower arrangement class, which she enjoyed, Rinmo adorned the family's new home with several jars of blooms.

"My parents were delighted when they saw the flowers," she said.

Like Rinmo, hundreds of thousands of people in Tibet used to live in rugged mountainous or remote areas with poor infrastructure and living conditions.